Entertainment Weekly gave their cover over to a “First Look” at The Avengers.  I don’t know if there are images from the movie in the article (I can’t really leave my computer to go to the store and buy the issue), but the cover is basically, “Hey, remember what these Marvel characters looked like?  Okay, well there have been some super minor changes that only obsessive nerds will notice, but the characters look pretty much the same.”  What this obsessive nerd noticed: Black Widow (Scarlett Johansson) got a haircut, you can see a hint of purple on Hawkeye’s (Jeremy Renner) outfit, and if that’s Bruce Banner’s angry face, then Mark Ruffalo may have been horribly miscast.

As for information contained in EW’s online sneak peek of the article, Renner says “Just because they’re super heroes doesn’t mean they’re super friends,” and writer-director Joss Whedon tells Entertainment Weekly he was scribbling out new dialogue every day.  “There is a weird element of: they handed me one of the biggest movies of all time,” says Whedon, “and I’m making it up as I go.”  Hit the jump to check out the full cover.  The Avengers opens in 3D on May 4, 2012. 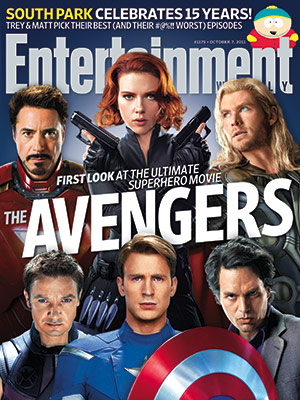