It’s likely that people remember more chemistry from an episode of AMC’s Breaking Bad than from their time in high school and college, but is the on-screen science sound?  For those who aren’t caught up with the exploits of Walter White (Bryan Cranston), the show tracks his transformation from chemistry genius to high school science teacher to cancer patient to meth kingpin.  Not only does Walt’s scientific background aid him in his drug-making ventures, it also gets him out of scrapes.  Where other crime lords in the making might simply fight or shoot their way out of trouble, Walt uses not just chemistry, but also physics and biochemistry to dispose of bodies, erase damning evidence, and to make sure that leverage is always on his side.  But does TV studio science check out in real life?  Hit the jump to find out.

*Here’s our disclaimer: This article is not intended to instruct readers in the methods of explosive production, body disposal, illegal drug manufacturing or to aide in the obtaining of deadly poisons or other unlawful materials.  Rather, the following is meant only to compare the Breaking Bad version of science to real world fundamentals.  Collider has long been a reputable business in good standing.  Please contact our attorney, Saul Goodman, with any legal concerns.* 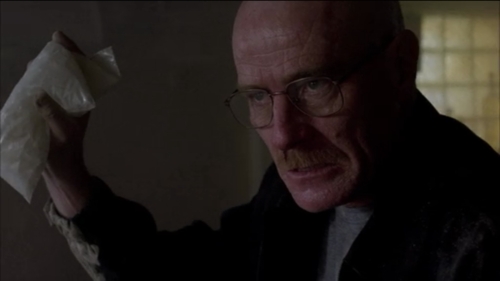 Two of Breaking Bad’s most famous words (other than the title itself, and the name of protagonist Walter White), “fulminated mercury” resulted in quite the explosive stand-off between Heisenberg and drug kingpin, Tuco Salamanca (Raymond Cruz).  Walt cooks up the compound and passes it off as crystal meth, using a small amount to demonstrate its potent properties while holding Tuco’s goons at bay with an amount that would likely level the building. Would this have worked in real life?

Luckily, the folks over at Discovery’s Mythbusters have already tackled this one, so I won’t have to fire up the ol’ fume hood.  Fulminated mercury [Hg(CNO)2] is indeed an explosive, classically used as a trigger in blasting caps used to set off larger explosives.  The crystal structure of mercury fulminate was discovered in 2007, over 200 years after the compound was first synthesized and about a year before it gained popular attention on the Breaking Bad season one episode, “Crazy Handful of Nothin'”.  It’s decidedly unstable and can be detonated by friction, heat, spark, or shock, such as slamming a few ounces of it against the floor.  However, the Mythbusters showed that, in order to get the explosive effects shown in the episode, not only would Walt need a much greater quantity of the compound along with a much faster throwing velocity, but that he and everyone else would have died from the concussive blast.

Compare the fulminated mercury seen in Breaking Bad versus a real chemist’s result on Mythbusters, and note the dissimilarities in appearance:

Another nasty bit of science at work in the criminal underworld of Breaking Bad was put to the test by the Mythbusters.  This particular scene involved Jesse Pinkman (Aaron Paul) attempting to dispose of a body by submerging it in hydrofluoric acid (HF).  Even though Walt warned him that this particularly reactive solution could only be stored in plastic, Jesse went ahead and dumped the body in a bathtub along with a couple gallons of HF.  A short while later, the body had been reduced to soup and the acid had also eaten through the tub and the floor beneath it, causing quite the cleanup for Jesse.

Too bad the HF didn’t dissolve anything but the drywall, though it did soften up the pork tissue a bit.  The issue here is that, even though the fluorine ion is very reactive, a solution of hydrofluoric acid does not fully dissociate (ie split apart into H and F ions) in water.  Since the ability of the compound’s ions to dissociate is related to the strength of the acid, HF is considered to be relatively weak.  That’s not to say it isn’t dangerous.  It can indeed corrode metal given time and will eat away at the silicon oxide bonds in glass.  Skin contact with the solution can lead to painless burns, tissue damage, cell metabolism interference, cardiac arrest and eventually, death.  Oh, and in gaseous form, it can damage lungs and the corneas of the eyes.  Fun!

The Mythbusters upped the potency and the volume by attempting to dissolve an entire pig in six gallons of sulfuric acid (versus two gallons of HF used by Jesse in Breaking Bad).  The pig went bye-bye relatively quickly (not to mention a noxious plume of smoke), but the bathtub and floorboard beneath it remained intact.  The Breaking Bad guys apparently wanted to keep the in-series facts canon since they used HF to dispose of more bodies over the next few seasons.

Continuing our tour of deadly chemicals, it turns out that methamphetamine isn’t just a deadly and addictive drug, the process to make it is chock full of dangerous and toxic chemicals (shocker).  While this should be viewed as an additional deterrent for, ya know, not cooking meth, Walt uses his knowledge of the cook to subdue his less-informed co-workers who happen to be holding him at gunpoint.  Knowledge is power! But is it accurate?

In the Breaking Bad pilot, Walt is forced to reveal his recipe so a couple of thugs won’t kill him and leave him in the desert.  As Walt is cooking in the RV lab, he takes advantage of the dangerous nature of the process to fill the enclosed space with a deadly gas.  The cooking of meth involves a chemical reduction of pseudoephedrine or ephedrine (a stimulant and decongestant in cold medications that used to be readily available in drug stores) via red phosphorus and hydriodic acid (another nasty acid for the reasons described above).  Red phosphorus is produced by heating its allotrope (different structural form of an element), white phosphorus.  On its own, white phosphorus can self-ignite and burn down your  DEA-approved commercial meth lab.  When mixed with sodium hyrdoxide, the deadly phosphine gas is produced.  The colorless and flammable gas wreaks havoc on the respiratory system when inhaled and is immediately life-threatening at 50 ppm (parts per million, or 0.005% of the volume of breatheable air).  Good thing Walt and Jesse had those respirators, otherwise they’d have been in bad shape.

It’s not all explosions and death and MacGyver saves from life-threatening situations.  Sometimes Walt just tries to educate people in the ways of science.  In the pilot, we see Walt attempting to fire up the curiosity of his high school chemistry students by spraying various solutions across an open flame, whereupon they change color.  His students didn’t care, but if you’re still reading, I’ll wager you’re interested.

Here’s where we jump from the chemistry lab to the physics lab as this display has more to do with excited energy states than chemical interactions.  We get to visit the first law of thermodynamics, which explains that energy is conserved, ie it cannot be created or destroyed, but rather transformed.  Walt fires up the Bunsen burner which acts as a heat source.  When he sprays a series of flammable solutions across them, the flame flares green and then red.  The trick is in the mix, as Walt has likely dissolved metal ions/salts into an ethanol solution.  While the ethanol quickly burns off, metal ions are left behind.  These ions absorb the thermal energy from the flame, causing their electrons to jump up a notch to an excited state, ever so briefly.  Since that state is unstable, the electrons return to their more tenable ground state, but where does that thermal energy go?  Ah, it is emitted as light!  A copper or barium solution produced the green color, while the red was likely due to strontium.  See how you can perform a more advanced presentation of the same concept here.

Yeesh, from fun with science to death by ricin.  Well, here we go.  Sometimes you don’t have to set up an elaborate lab to combine various chemicals with heat and pressure to form toxic compounds … nature already does that for us!  (And Wikipedia posts the helpful header, “Not to be confused with Rice” on their Ricin page. That would be unfortunate, indeed!)  Ricin is a toxic compound found in the seeds of the castor oil plant, Ricinus communis.  A chemical compound known as a lectin, ricin interferes with the body’s most basic cellular ability to produce proteins, throwing a wrench in the works of metabolic processes essential to life.  When inhaled or injected, ricin can kill on the order of 22 micrograms per kg (about 1/228th of a standard aspirin tablet, which is why the substance being detected on envelopes sent through the mail is such a serious matter), but it takes about 1,000 times more to kill someone when taken orally (still not that much, ie about four aspirin tablets).  Humans can also be poisoned by consuming the castor beans themselves (about 5-20), but should recover with treatment.  [Fun fact: Ricin is known as a type 2 ribosome-inactivating protein, with the clever acronym of RIP.]  The scariest part about ricin is how easy it is to obtain the plants and process the beans.

As of the writing of this article, the ricin remains in the mix and we’re all waiting to see just how Walt intends to use it, if at all, in the finale.  He already showed some restraint (or just pure maniacal machination) in not using ricin to poison Brock, even though he managed to harm the little guy in another manner.  Which brings us to…