Earlier this year, Entertainment Weekly plastered the first look at Ryan Reynolds in costume as Green Lantern on their magazine’s cover.  Now, their upcoming issue has Chris Evans dressed in his costume for Captain America: The First Avenger.  From what we can see, the costume matches up pretty well with the concept art that we showed you back in June.  If you can get past the look of constipation on Evans’ face, I think you’ll agree that it’s not a bad-looking outfit.

Hit the jump to check out the image.  The film, directed by Joe Johnston (The Wolfman), also stars Hayley Atwell, Sebastian Stan, Stanley Tucci, Toby Jones, Neal McDonough, Tommy Lee Jones, and Hugo Weaving.  Captain America: The First Avenger is set to open in 3D on July 22, 2011. [We have updated this article with a high-resolution image of the EW cover.  Check it out after the jump.]

The year is 1942, and Steve Rogers is a scrawny lad who desperately wants to fight Nazis for his country but can’t because he’s been deemed physically unfit. His fate — and his physique — is radically transformed when he signs up for Project: Rebirth, a secret military operation that turns wimps into studs using drugs and assorted sci-fi hoo-ha. There’s a love interest (Major Peggy Carter, played Haley Atwell), there’s a sidekick (Bucky Barnes, played by Sebastian Stans), and there’s the Red Skull (Hugo Weaving), Hitler’s treacherous head of advanced weaponry, whose own plan for world domination involves a magical object known as The Tesseract (comic fans know it better as The Cosmic Cube).

Click on the image to see it in high-resolution.  For even more brand new Captain America images, click here. 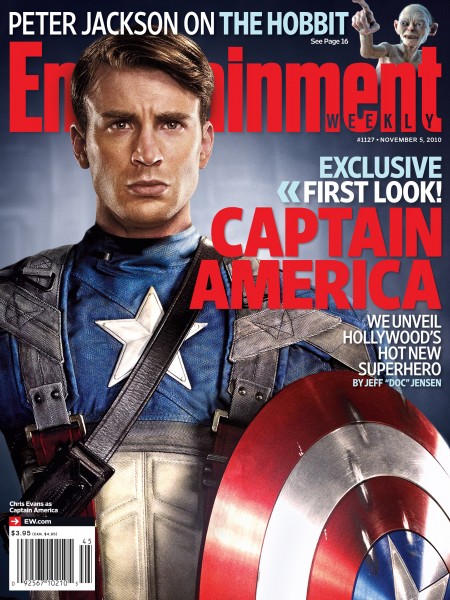