Last year, when director Alan Taylor‘s Thor: The Dark World was filming outside London, I got to visit the set with a few other online reporters.  While I’ll have a lot more to say about the set visit (which was fantastic) very soon, for now, Marvel and Disney have only lifted the embargo on the group interview with Chris Hemsworth.  Since he was extremely busy filming a key scene from the third act, we only got a short time with him.  He talked about adjusting to a new director, expanding the scope of the film beyond Asgard, building to The Avengers 2, the tone, the Loki/Thor relationship, whether we get to see Thor’s role across the greater Nine Worlds, and a lot more.  Hit the jump for what he had to say. 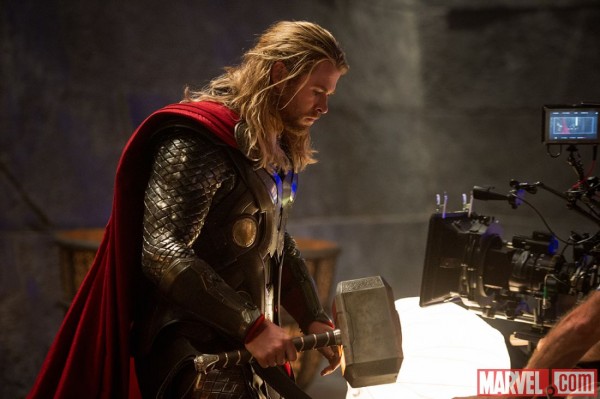 Question: We asked you this same question for Avengers so where is Thor at this point when this movie starts? After Avengers?

CHRIS HEMSWORTH: Yeah, yeah. Where is he? Basically, Avengers is kind of a side-step in amongst everything for all the journeys, for the Iron Man, Thor and this is certainly a continuation of it but at the same time, Thor’s journey I think picks moreso up from where we left the first one, about to take on the throne, earning the right to be king and now coming to the realization of what responsibility comes with that and also Alan (Taylor) keeps talking about the dark side of that responsibility and the secrets within being king and becoming very political about what people need to know and what they want to know. So… can I say anymore about it? Yeah, and obviously Tom’s on set so this is continuing which is great to have some meatier stuff with Tom. Certainly in the Avengers was the stuff I got to sink my teeth into was those scenes and following up our relationship and the ongoing question from Thor about what is it that Loki wants and why and how did we come to this? I think we get to possibly attack some of those questions properly.

Are we going to see as much comedy as The Avengers or is it going to have more of a seriousness?

HEMSWORTH: Probably not, because Downey’s not in it (laughter), so that takes cares of that for us. Yeah, Natalie and Kat Dennings certainly have some great humor and a few nice fish out of water moments with Thor but not quite as naïve obviously as the first one but there is the sort of Earthbound stuff sort of really grounds this story and in both films and keeps a lightness to it that trickles through Asgard as well.

In the first film, there was a lot of time on Asgard and a ton of time on earth. How does it breakdown the percentage in the sequel in terms of where you guys are spending time? 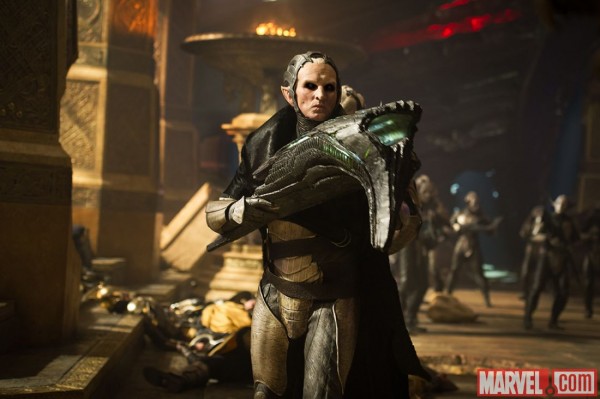 HEMSWORTH: Um, it’s certainly set in both worlds, it’s pretty substantial like last time, pretty similar I think. We certainly see more of Asgard and more of the Nine Realms in this film than we did in Thor. Thor was we were just on Asgard where this is, there’s a bigger universe out there that we get to explore.

How is the experience different on this film working with Alan Taylor as a director vs. Kenneth Branagh on the first one?

HEMSWORTH: Obviously, two different people and you get two completely different styles but also two very different stories: origin story vs. part of this ongoing… it’s moving now… especially since Avengers… so you know… they certainly didn’t come in with the Anglo attitude on how Thor should be. We all sort of knew where it was headed but I think had the same want to elevate it and take it to the next level and Alan, you can even see with the set design, he said, “Why don’t you ground it in a more organic tone?” Game of Thrones is definitely set in a reality based world but there’s fantasy elements that are quite prominent and that is similar to what we have going on here.

What can you tell us about Thor’s relationship with his father and the Lady Sif this time around?

HEMSWORTH: Not much… in the comic books there’s obviously an attraction with Thor and Sif and what have you and I dunno, there was a little peppering of that I think in the first one, little hints at it. There may be more indications in this one… (I’m being) a politician. (laughs) The stuff with Odin is interesting because what we really didn’t want to do, is that you gotta have the right amount of conflict in order for this to be interesting. The conflict between Thor and Odin was so great in the first one and you didn’t want to repeat that so it certainly they disagree as they always will at times but there’s a far greater respect from each other, so they have some more mature conversation but there’s more at stake this time too, you know? It’s not just their individual egos that is the whole universe is at stake.

HEMSWORTH: I mean I can’t say too much but I think in the comic books, you kind of roll your eyes sometimes at the amount of times that they’re back to being best friends so we wanted to keep in mind that he did just try to kill you for the seventh time, and Earth and millions of people and what have you, so…

Not to put words in your mouth but you guys are getting along but maybe you’re not as close as you are in the comics?

HEMSWORTH: No, I think we maybe there’s something we both.. a common need or something, which therefore, that would… you know the scene in Avengers where Thor says, “Careful how you speak. This may be crazy but that’s my brother” kind of sums up, I mean, yeah he’s a screw-up but “He is my brother” and I don’t think they’re going to go back to being best friends but there’s still, I think Thor’s at a loss about how they got to this point, you know? Because I think so far it came out of nowhere, and I think then in this film, you can certainly acknowledge with a maturity that okay, he should have been more aware of Loki over the years and where he is positioned in all of this and why maybe that led him down a certain path, so I think there’s maybe an empathetic view of Loki that maybe nobody else can have ‘cause they’re not bound by blood, you know? 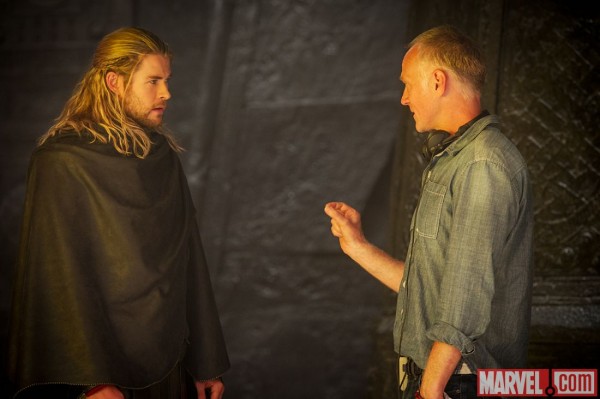 We know that Avengers 2 is coming so do these next stage of films act as standalone films, do they all still build to another bigger picture?

HEMSWORTH: I think they all link up in some way but I think Marvel are pretty adamant about them being their own stories, cause I was wondering if we were going to start doing cameos of everyone’s film but I guess that would take away from the impact of all of us when we do finally come together, so I think these stories they kind of segue off into their own world, and it’s the Avengers that are conveniently not around at the time. (laughs) And that’s the thing. You watch Iron Man or the trailer and you go, “Where’s Cap? And where’s Thor? And where’s the Hulk? Are they all on vacation or something?” But they’re being really smart about removing everyone in a way that hopefully takes care of that.

Do we get to see Thor’s role across the greater Nine Worlds?

HEMSWORTH: I think this is certainly…we cover more ground than we did in the first one. We’re no just locked in Asgard. We certainly venture out into the bigger universe but the scope of this just feels massive, you know? We just were in Iceland for a week and there’s volcanic lava rock mountains and snow-capped mountains and we didn’t see that in the first one so it already feels like there’s a bigger expanse to it.

Was there any comic stories that you had to read for this?

HEMSWORTH: No, I hadn’t really read comics before coming in to shoot the original Thor and during that and beforehand, I just read stacks and got my head around it all and then we reference, especially when we were putting the script together before started shooting, other stories. There wasn’t any specific thing where they said “read this.” There were very specific characters that were in this episode where it was like “Cool, we can use him here.”

HEMSWORTH: Um… I mean, this is tough without giving anything away again. (laughs) We’re obviously not related. (laughter). Thank God for that.

Is he more evil than Loki or worse than Loki in certain ways?

HEMSWORTH: Loki has a point, you know? Loki has some redeeming qualities at times and he’s kind of lost his way as opposed to never having been on the right path to begin with, so that would be the difference between the two of them.

Is there a personal element between Thor and Malekith?

HEMSWORTH: Oh, yeah, of course. It’s all bound in plenty of substantial and warranted conflict and disagreement, whatever.

What about Jane and Thor? Are we going to see more of their story?

HEMSWORTH: Sure, yeah, yeah. I mean obviously Natalie’s in the film and it picks up where we left off with the bridge being broken between them and how do we fix that?

Is she pissed off hat you didn’t call her?

HEMSWORTH: She will be, yeah.