I’m currently sitting in my hotel room posting stories (someone has to bring the news to you fine people), but Steve tweeted that it was “beyond insane” down at the Mondo booth (#437) on the Comic-Con exhibitor’s floor.  Don’t expect the insanity to let up tomorrow, because Mondo will be releasing a poster for The Dark Knight Rises by Jock.  I would love to see the level of detail on this thing close-up, and the poster is a nice callback (either intentionally or unintentionally) to the bat-centric Batman Begins in that Batman actually used bats as a weapon.

Hit the jump to check out the poster.  It measures 24″ x 36″, is limited to an edition of 375, and costs $50.  The poster will go on sale tomorrow, July 12th at a random time, so be sure you’re following @MondoNews for the announcement.  The Dark Knight Rises opens July 20th.

Here’s the official synopsis for The Dark Knight Rises: 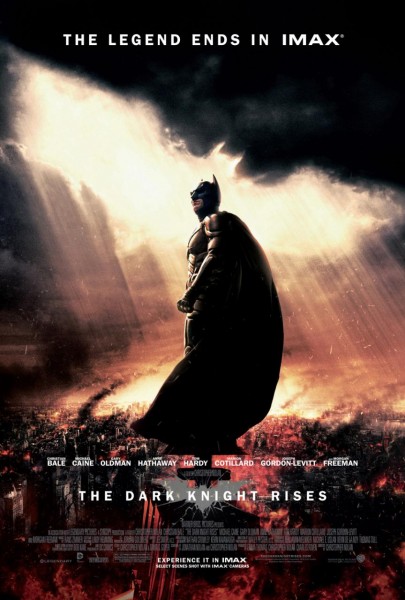 It has been eight years since Batman vanished into the night, turning, in that instant, from hero to fugitive. Assuming the blame for the death of D.A. Harvey Dent, the Dark Knight sacrificed everything for what he and Commissioner Gordon both hoped was the greater good. For a time the lie worked, as criminal activity in Gotham City was crushed under the weight of the anti-crime Dent Act.

But everything will change with the arrival of a cunning cat burglar with a mysterious agenda. Far more dangerous, however, is the emergence of Bane, a masked terrorist whose ruthless plans for Gotham drive Bruce out of his self-imposed exile. But even if he dons the cape and cowl again, Batman may be no match for Bane.

Be sure to check out a ton of info from The Dark Knight Rises set visit, including:

And keep up with all of our continuing coverage here. You can get caught up on our previous posts below: