I can’t think of two more likeable stars than Steve Carell and Tina Fey so it’s no surprise that their cinematic joint effort, Date Night, exudes a quality of general likability. Carell and Fey have an easy, natural chemistry playing Phil and Claire Foster, a married couple from New Jersey who decide to reignite their romance with a night out in the big, bad apple. When they end up mistaken for a couple of low-life crooks running a blackmailing scheme against a local politico, they end up on the run from corrupt cops and big-city mobsters. There’s a tradition of Manhattan-set screwball comedies that place during the course of one wild urban night – Martin Scorsese’s After Hours comes to mind – and while Date Night doesn’t do much to advance the sub-genre, it’s still a breezy, funny way to pass the Night. Continued after the jump:

Director Shawn Levy has become Hollywood’s go-to guy for putting comic actors through their mainstream comedy paces, having previously directed Ben Stiller in the Night at the Museum series and Steve Martin in Cheaper by the Dozen. Here he lucks out by having twice the comedic prowess with Carell and Fey. His stars’ facility with improvisation frees Levy from any unfortunate reliance on C.G.I. museum creatures or cutaways to kids doing cute shit. These two are walking special effects. Any time the script feels a little routine – and it sometimes does – their flair for invention perks up the proceedings. They’re also gamely supported by Taraji P. Henson as a discerning lady cop, James Franco and Mila Kunis as sleazy, aspiring thieves and Mark Wahlberg – effectively lampooning his mid-nineties persona – as a perpetually shirtless securities expert.

Hollywood folk talk a lot about the need for escape right now when trying to justify the uninspiring greenlighting of one superhero geek fantasy movie after the next. I’d like to argue that no, we don’t need to another random Australian actor plucked from obscurity to enact some second or third tier fantasy comicbook narrative to satisfy movie audiences. Just keep putting Carell and Fey on screen and let them to do their hilarious thing. 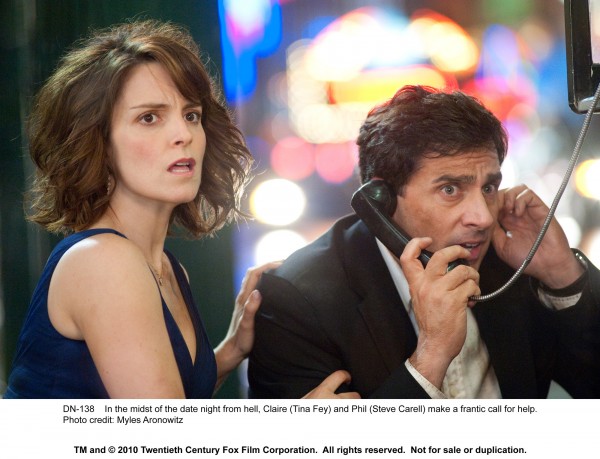 A breezy, entertaining comedy with Carell and Fey elevating the material with their natural comic riffing.

This 2-Disc Blu-ray set includes both rated and unrated versions of the film. The rated version is PG-13 for sexual and crude content throughout, language, some violence and a drug reference. It has a run time of 88 minutes.