It’s official! Manu Bennett is heading back to Arrow to put Slade Wilson, aka Deathstroke, back in action. Bennett will return for the Season 5 finale, as confirmed by series co-creator Marc Guggenheim. The finale is titled ‘Lian Yu,’ the name of the island where Oliver Queen and Slade Wilson became brothers first, then enemies and where we last saw Wilson locked up in an A.R.G.U.S. prison cell.

Wilson popped up near the end of Arrow‘s first season as a fellow castaway on Lian Yu, where he and Oliver bonded and both fell in love with Shado. Slade was eventually injected with the super soldier serum Mirakuru and returned in the second season as one of Oliver’s most formidable foes. After he transformed into Deathstroke, he returned to Starling City with a mission of vengeance against Oliver after he saved Sarah Lance’s life over Shado’s. Wilson put a sword through Momma Queen and damn near destroyed the whole city before he was eventually apprehended and locked up at the hands of Team Arrow. 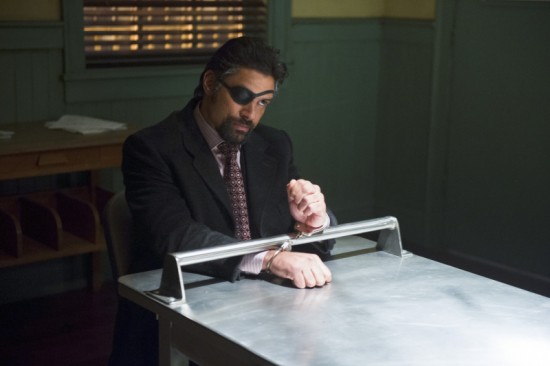 Details of Deathstroke’s role in the finale are being kept under wraps, but if you’re expecting to see him raise havoc in Oliver’s City once again, you might be in for a surprise. Speaking with Entertainment Weekly, writer Wendy Mericle recently teased an unlikely ally in Oliver’s quest to take down Prometheus. Who’s the person you’re least likely to team up with? Probably the guy who killed your mom.