Warner Bros. has released the first Focus trailer for Crazy, Stupid, Love. directors Glenn Ficarra and John Requa’s upcoming “comedy-caper-love story”.  The film revolves around a seasoned con man named Nicky (Will Smith) who becomes romantically involved with Jess, a novice con artist (Margot Robbie), only to subsequently break things off when she gets too close for comfort.  Three years later, Jess—now an accomplished femme fatale—pops back into Nicky’s life, throwing his latest scheme into jeopardy.  I’m not exactly sure what to make of the film from this trailer.  It’s much more dramatic than I was expecting from its description as a comedy caper, and there seems to be a heavy amount of weight to the proceedings.  It’s too early to tell if the chemistry between Smith and Robbie is solid, but I imagine the quality of the film hinges on that fact alone.

Watch the first Focus trailer after the jump.  The film also stars Rodrigo Santoro and Gerald McRaney.  Focus opens in theaters on February 27, 2015.

Here’s the official synopsis for Focus:

Will Smith stars as Nicky, a seasoned master of misdirection who becomes romantically involved with novice con artist Jess (Margot Robbie).  As he’s teaching her the tricks of the trade, she gets too close for comfort and he abruptly breaks it off.  Three years later, the former flame—now an accomplished femme fatale—shows up in Buenos Aires in the middle of the high stakes racecar circuit.  In the midst of Nicky’s latest, very dangerous scheme, she throws his plans for a loop…and the consummate con man off his game. 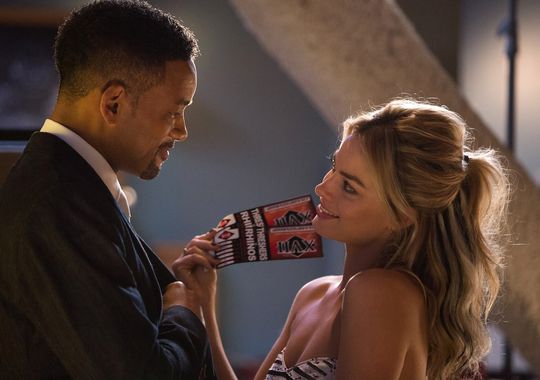