The first image from fairy tale re-imagining Hansel & Gretel: Witch Hunters has gone online. The movie stars Jeremy Renner and Gemma Arterton as the eponymous characters who are all growed up and looking for a little payback against the witch community.  Arterton tells Entertainment Weekly that the movie is “as much Pulp Fiction as fairy tale.”  So how do you defeat witches?  Do you burn their gingerbread houses to the ground?  Judging by this image, witches are terrified by the black leather.

Hit the jump for the full image plus more on what Arterton had to say about the movie.  The film also stars Famke Janssen and Peter Stormare.  Hansel & Gretel: Witch Hunters opens March 2, 2012. 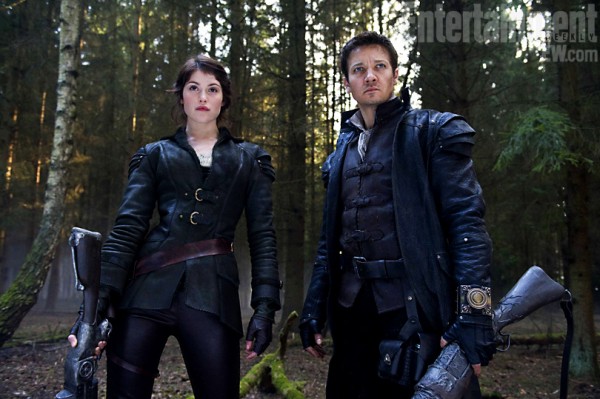 Arterton says that audiences can expect a film with some comedy and a close brother and sister relationship, but that it’s got a “Quentin Tarantino feel”.  She also says that the movie will try to build off the logical conclusion of how these Hansel and Gretel would have grown up:

EW: Interesting. So instead of Jules and Vincent, we have Hansel and Gretel. And beyond being killers, they’re siblings who feel they need to protect each other?

Gemma Arterton: We spent a lot of time thinking about that and behaving like brother and sister, making it detailed so it wasn’t just two actors kicking butt, really. That would get boring. In our minds, these are two people who grew up with no parents and they only have each other and the bond they have, and with the complexities of that, some resentment.

They would be pretty messed up, come to think of it. After nearly being eaten …

Arterton: They had to murder somebody when they are kids! So it’s all about being tough. Jeremy and I found within the script moments where we showed the vulnerable side of them. Often in action movies, people are scared to put that in. I think it was important. Just a couple moments, tender moments, when the guard drops, then you understand.

She also says Gretel “is much more in tune with her spiritual side,” but Hansel “is a typical action hero, cheeky, funny, a womanizer.” It will be interesting to see how the two actors play off each other, particularly in a brother and sister dynamic which won’t have the sexual tension of the typical male-female action hero duo.