A few months back we got our first look at Jennifer Lawrence as Katniss Everdeen in The Hunger Games.  Now Entertainment Weekly has provided the first look at the two lead characters Peeta Mellark (Josh Hutcherson) and Gale Hawthorne (Liam Hemsworth).  Looking at the photo, it seems like someone messed up the physiques.  In the image, Gale looks lanky and slightly malnourished while Peeta is crazy-buff.  I’m sure someone will tell me I’m misremembering the novel, but I was under the impression that Gale was physically powerful since he’s a hunter and that Peeta was well-fed (not fat, but not buff) since he was a baker and that’s why he has to rely on camoflauge in the Hunger Games.  EW says his pumped-up biceps make you believe he’s a baker, but I’ve never thought of bakers offering people two tickets to the gun show.  But the physiques don’t matter as much as the performances and it’s more important that Hutcherson nail Peeta’s kindness and charm.

Hit the jump to check out the full EW cover (hopefully the issue will have some more images) and then sound off in the comments about how wrong I am concerning the characters’ description in the books.  The Hunger Games opens March 23, 2012. 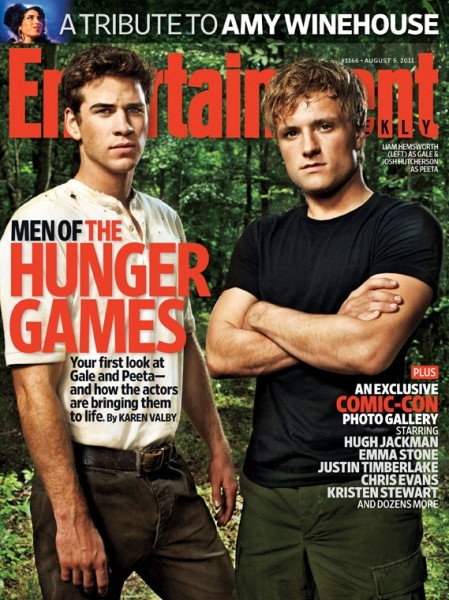 Here’s the official synopsis for The Hunger Games:

Every year in the ruins of what was once North America, the nation of Panem forces each of its twelve districts to send a teenage boy and girl to compete in the Hunger Games.  Part twisted entertainment, part government intimidation tactic, the Hunger Games are a nationally televised event in which “Tributes” must fight with one another until one survivor remains.

Pitted against highly-trained Tributes who have prepared for these Games their entire lives, Katniss is forced to rely upon her sharp instincts as well as the mentorship of drunken former victor Haymitch Abernathy.  If she’s ever to return home to District 12, Katniss must make impossible choices in the arena that weigh survival against humanity and life against love.

THE HUNGER GAMES will be directed by Gary Ross, and produced by Nina Jacobson’s Color Force in tandem with producer Jon Kilik. Collins’ best-selling novel, which has over 3 million copies in print in the United States alone, is the first in a trilogy of novels which have developed a global following.