Jackass films aren’t made with a shooting script and meticulous camera work. The process involves a lot of trial and error, and so for every movie, it seems there’s enough footage to make a number of films. And where the theatrical Jackass 3-D focuses on the stuff that went great, Jackass 3.5 offers the stunts that were too stupid, too lame, too familiar, or too dangerous to make the theatrical release. It’s the whole gang: Johnny Knoxville, Steve-O, Bam Margera, Ryan Dunn, Chris Pontius, Ehren McGhehey, Dave England, Preston Lacy and Wee-Man. And they’re there to celebrate their failures. Check out our review of the Blu-ray after the jump.

As a fan, what I like or find fascinating about these .5 Jackass films is that by collecting all the bits that don’t work, it makes you strangely sympathetic to the film. In some cases the bits thought up by the cast aren’t all that funny – Wee Man wants to do what he calls “The Cheetah” where he’s shot with paintballs so he can have spots, but half the people who are shooting him don’t do a good job. Even if they had, it doesn’t strike me as that interesting a bit to begin with. But it does also hint at some of the obvious factions in the group.

And contempt is one of the best parts of these things. As much as the group has a ramshackle familial quality, the tensions between them are rarely kept below the surface. And sometimes punishment is sanctioned: Dave England is a horrible drunk who will get so wasted that he blacks out, and becomes another person. After the gang suffers through a night of his assholery, the next day Dave’s forced to do a stunt no one thinks will work, but is used to get revenge on him. There’s also the behind the scenes pranks, which hit a highpoint when Knoxville uses a stunt to shoot the group with paintballs via a remote controlled helicopter. If it’s not funny to watch, the effort to do it makes it fascinating. But the best prank is saved for last.

The set-up of 3.5 is that it has the cast talking about the bits that don’t work, and things that come close, but it seems there are less minor funny bits that didn’t make it in. If one of their nicer jokes don’t work, it seems that’s the stuff that’s not worth showing – though producer Spike Jonze does a bit as an old lady with a tremendous camel toe where he nearly has a heatstroke. The show always borders on Allen Funt-y sort of Candid Camera gags, and that may be the most “safe” sketch even if Jonze is offering to sleep with strangers. 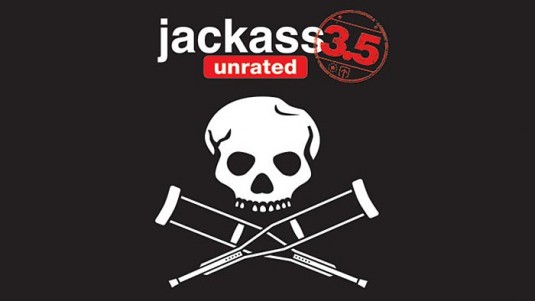 There are some solid bits, and the basketball nut shot montage (seriously) is a thing of beauty. This doesn’t have the sense of “it’s coming to an end” like the third film did, instead it feels like these guys are going to keep doing this until someone dies. Which seems both fitting and inevitable.

Paramount’s Blu-ray (which will be a Best Buy exclusive for the time being) is presented in widescreen (1.78:1) and in 5.1 DTS-HD surround. This was shot with digital cameras, so the quality is generally excellent, but some of their equipment – either because of the 3-D to 2-D conversion, or whatever – aren’t theatrical quality. But that’s to be expected with this series. The featurette “Jackass: The Beginning” (41 min.) walks through the process of making and refining the TV show version, and how the cast came together out of different disparate groups. It also offers very direct comparisons to show how much these guys have aged over ten years of doing this stuff.

There are also eleven deleted scenes (17 min.), and outtakes (20 min.) that suggest anything that’s left must be awful. There’s some okay bits in here, but these are the leftovers from the leftovers. Finally there’s a bit on the “Jackass European Tour” (6 min.), where the cast (sans Steve-O) promote the film internationally. Much of this revolves around them doing drunken stunts with foreigners, and wearing silly things.