As part of the network’s TCA Press Tour presentation, President and General Manager of FX Networks, John Landgraf, took some time to talk about the creative direction for Season 2 of American Horror Story, the fact that Ryan Murphy is currently assembling a new cast with the addition of two or three previous cast members, and the shelf-life that he sees for the series. He also talked about the appeal of Anger Management and what made them want to work with Charlie Sheen, as well as the status of Powers, an adaptation of the comic book series about homicide detectives who investigate cases involving superheroes and super-villains with superhuman powers, which are common in their world. Check out what he had to say after the jump.

Question: How did Anger Management end up at FX? Was there a demo reel or a full pilot? Did you have any trepidations going in, or need any assurances from Charlie Sheen?

JOHN LANDGRAF: It was just a regular pitch. They pitched it to a number of networks and channels. And, I would say that I walked into the pitch as skeptical as you might imagine I would be. Charlie was there, as was the creator and showrunner. And, it was just a really excellent pitch. What I heard was a really good pitch for a comedy series, that was funny and complicated, and I think the character that Charlie ought to be playing, at this point.

He is a character who has a checkered past, but is pretty self-aware, and is struggling in a very honest way, with that checkered past, and a desire to do more positive things in his life. He’s got a complicated relationship with his 13-year-old daughter. He’s got a positive relationship with his ex-wife. His best friend is a woman who was his mentor. There were a whole lot of elements in the piece that I thought were good fodder for comedy.

We’ve seen 15 storylines, and by storylines I mean three to four sentences, so hardly even a fully-baked outline. It was just a snippet of a storyline. We haven’t seen a script yet. I really don’t know what the show is yet, other than the pitch I heard and a few storylines. All I can tell you is that I go into the process as optimistic as you can, having not actually seen scripts.

Have you ever bought a show with that little information on it before, without seeing any footage or a full script?

LANDGRAF: No. And, we don’t like to go to series without making pilots. We’re very steadfast. There are even some premium networks that have switched over their process to go directly to series. I believe really deeply in the pilot process because you learn things about tone and casting. Even some of our best shows have had substantial re-shoots and reworking, before they’ve gone on the air. But, it’s a very inexpensive series. We don’t have the same level of creative input or control that we have over our other original series. Lionsgate is putting a very substantial deficit into the show, and is a very important creative partner. And, we’re a network that likes to take risks.

Can you talk about American Horror Story and the plans to have a new cast in the second season? When are you going to be gearing up to look for that new cast?

LANDGRAF: Ryan Murphy is already looking for that cast. He’s already in active conversations with new people. Also, two or possibly three of the existing cast members – some series regulars as well as guest cast – may be continuing next year, although they would be playing entirely new roles.

This idea was something that I was really excited about, from the get-go. I think that one of the things Ryan is particularly strong at is creating a really distinctive world, in all its aspects, and that includes the tone and mood of the place, the production design, the costume design, the music and the cinematography. If you looked at the way those characters are dressed, right down to Jessica Lange’s wardrobe and the way her hair was styled, Ryan Murphy was involved in every aspect of that.

He really loves to create a new world. You saw with even Nip/Tuck that he wanted to recreate it, at a certain point, so he moved it from Miami to Los Angeles, which allowed him to tear down and rebuild all the sets and recreate the look. This gives him the opportunity to do that, every year. We just didn’t want to tell the audience what was coming because we felt like the experience of going in, not knowing what the show was, what it was all about, and where it would end, would be somewhat diminished, if you knew that we were essentially going to burn this cast and this location to the ground, at the end, and then move on to something else.

What is the long-term shelf life for American Horror Story?

LANDGRAF: I know that sounds crazy to those of you who saw the pilot and thought these things had been thrown into a pot, but they really knew what they were doing and where they were going. And, though they have more leeway and creative freedom than most, so I don’t always know every detail of everything they’re up to, I certainly knew a lot. For example, I knew that the entire family was going to die, by the end of the season.

Interestingly enough, one of my biggest concerns about the piece is that the nature of the genre is that you’re always ahead of the protagonist. You know things the protagonist doesn’t know. So, we knew in advance that certain critics and audiences would get frustrated with the leads because, essentially, they knew more than the leads. It’s just a classic rule of storytelling that the leads should know more than the audience, or the same amount, but not less.

But, the thing that was really interesting about it is that they managed to evolve Jessica Lange into something of a lead character, by the end. And then, ironically, after the lead characters were dead and they knew everything, they were able to recapture their status as leads, by the end of the piece. In fact, the final episode, where Vivien and Ben Harmon spook the new couple out of the house, was the first time in seven or eight episodes when they were actually ahead of the audience. So, it was an experiment.

I didn’t know, going in, whether that particular aspect would alienate the audience. As it turns out, it really didn’t, in terms of viewership. But, that’s Ryan. He’s going to experiment with the form and he’s going to push it to places that you don’t expect. If you want to be in business with him, you have to expect that you’re going to be on a little bit of a wild ride. 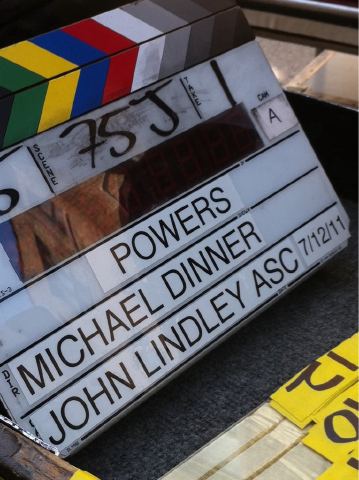 What is the status of Powers?

LANDGRAF: We didn’t pick the pilot of Powers up. We went back and Chuck Eglee, who had written that, did a fairly substantial rewrite that would require pretty extensive re-shoots of the pilot. Right now, we’re in the process of deciding whether to pull the trigger on that re-shoot. I’ll say that I really adore the underlying material. Also, Brian Bendis, who’s been a fantastic partner on the project, has been with it, from the beginning.

When you think about a 10 o’clock drama, like The Sopranos, or any sort of serious drama, there’s never been either a theatrical feature film or a television series that’s taken the superhero genre into that type of tonality. It’s never been done, and it’s just really a struggle. But, until Game of Thrones, I don’t think anybody had ever taken the fantasy genre into a 10 o’clock drama territory either. I have enormous respect for HBO, and for David Benioff and everybody who was involved in that show because they managed to pull it off. So, it can be done. It’s just proving really difficult.