Hit the jump to check out the image of Depp along with a set photo of the mechanical man that Hugo (Butterfield) and his eccentric friend Isabelle (Moretz) encounter.  Hugo Cabret is due out November 23rd.

Update: Paramount has informed us that Depp is not in the movie.  However, when I look at the picture, I beg to disagree.  We’ll find out later this year.

Image via Le Parisien [via The Playlist].  The Playlist makes a good point that Depp’s participation isn’t too surprising when you consider that Graham King’s GK Films is producing Hugo Cabret and has a long-standing relationship with Depp and his Infinitum Nihil production company.  GK Films previously produced Depp’s The Tourist and Rango and they’re also behind his upcoming films The Rum Diary and Dark Shadows. 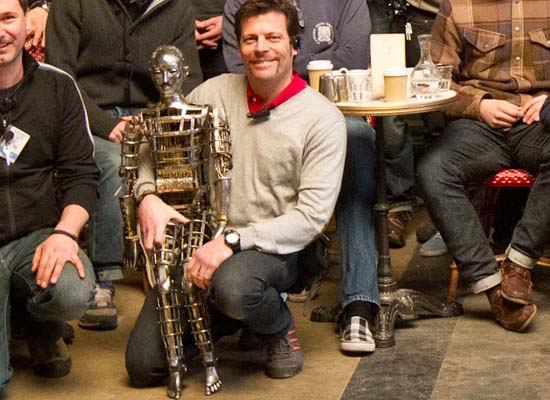 I like that the mechanical man has a tiny mustache.

Hugo Cabret, Scorsese’s first film shot in 3D, tells the tale of an orphan boy living a secret life in the walls of a Paris train station.   When Hugo encounters a broken machine, an eccentric girl, and the cold, reserved man who runs the toy shop, he is caught up in a magical, mysterious adventure that could put all of his secrets in jeopardy.