Though Joss Whedon has certainly been busy developing, writing, and prepping the sequel The Avengers: Age of Ultron since the release of the first Avengers last May, the filmmaker’s contract with Marvel also allows him to consult on all of the studio’s other properties.  We know that Whedon had a hand in the script for Captain America: The First Avenger, but we have yet to here many specifics regarding his involvement in Phase Two films—until now, that is.

It’s no secret that director Alan Taylor went back for some Thor: The Dark World reshoots that, in part, added more of Tom Hiddleston’s Loki to the film, but Taylor recently revealed that he also called in Whedon to rewrite three scenes in the pic, including one major sequence that Taylor was finding difficult to crack.  Hit the jump for more. 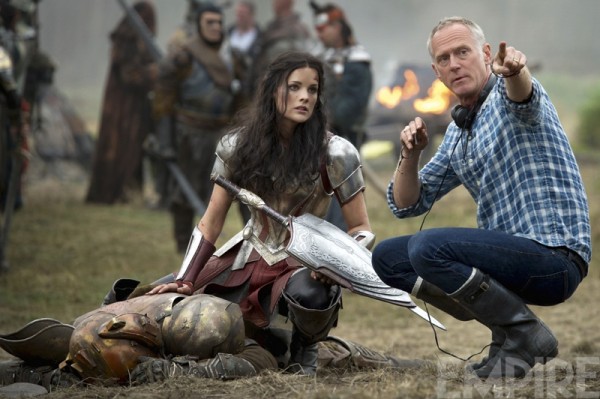 Speaking with SFX Magazine (via CBM), Taylor revealed that Whedon was flown to the London set of Thor: The Dark World to pitch in on a couple of tough scenes:

“Joss came in to save our lives a couple of times,” laughs the director. “We had a major scene that was not working on the page at all in London, and he basically got airlifted in, like a SWAT team or something. He came down, rewrote the scene, and before he got back to his plane I sort of grabbed him and said, ‘And this scene and this scene?’ And he rewrote two other scenes that I thought had problems. Then finally we let go of him, he took off again, and we shot the scenes; and they were just much better and much lighter on their feet. Much more fun, much more surprising than what we had been trying to do. I can relate to guys who come out of the TV world, since that’s where I come from. And being able to land and work and solve a problem quickly… I really was grateful.”

It’s unclear if this scene fell within the reshoots or principal photography, but I’m guessing it’s the latter.  Either way, though, it’s nice to hear that Whedon is graciously pitching in on Marvel’s non-Avengers movies when they need his help.  Thor: The Dark World opens in 3D on November 8th.