The first trailer for the long-delayed Red Dawnremake has been released.  Watching this trailer, I’m reminded of why we now use aliens for all of our invasion movies.  Being a superpower, it’s tougher to imagine the U.S. getting invaded by almost any other country.  The original worked in 1984 because it preyed on Cold War fears, and those fears no longer exist.  Even when China was the foe for the remake (a post-production change was made so that we wouldn’t lose money from their bustling economy; now the baddie is North Korea, which is laughable since they can’t even get a working rocket let alone an invasion force), there wasn’t too much fear, although that would at least provide a credible war.  I will say that the rah-rah freedom on display is kind of cute, and it’s interesting that the remake focuses on the characters going on a mission rather than simply trying to survive like in the original.

Click over to Yahoo! Movies to watch the trailer in HD.

In “Red Dawn,” an American city awakens to the surreal sight of foreign paratroopers dropping from the sky – shockingly, the U.S. has been invaded and their hometown is the initial target. Quickly and without warning, the citizens find themselves prisoners and their town under enemy occupation. Determined to fight back, a group of young patriots seek refuge in the surrounding woods, training and reorganizing themselves into a guerilla group of fighters. Taking inspiration from their high school mascot, they call themselves the Wolverines, banding together to protect one another, liberate their town from its captors, and take back their freedom. 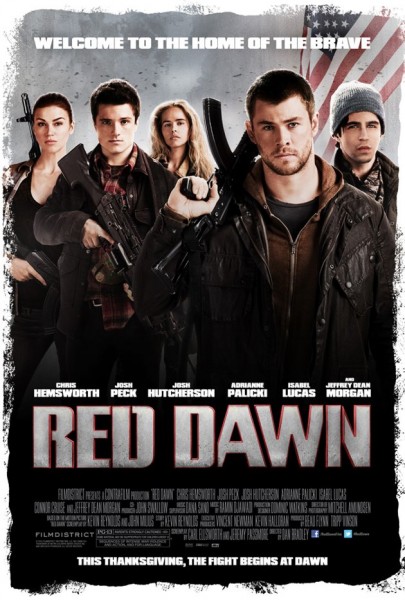