We’ve got a few new posters to share today.  Briefly:

Hit the jump to take a look at the posters.

Here’s the official synopsis for Riddick:

The infamous Riddick has been left for dead on a sun-scorched planet that appears to be lifeless. Soon, however, he finds himself fighting for survival against alien predators more lethal than any human he’s encountered. The only way off is for Riddick to activate an emergency beacon and alert mercenaries who rapidly descend to the planet in search of their bounty.

The first ship to arrive carries a new breed of merc, more lethal and violent, while the second is captained by a man whose pursuit of Riddick is more personal. With time running out and a storm on the horizon that no one could survive, his hunters won’t leave the planet without Riddick’s head as their trophy. 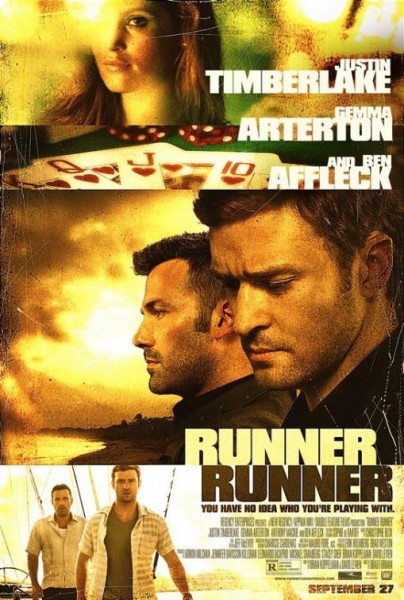 Princeton grad student Richie, believing he’s been swindled, travels to Costa Rica to confront online gambling tycoon Ivan Block. Richie is seduced by Block’s promise of immense wealth, until he learns the disturbing truth about his benefactor. When the FBI tries to coerce Richie to help bring down Block, Richie faces his biggest gamble ever: attempting to outmaneuver the two forces closing in on him.

The true story of Oscar, a 22-year-old Bay Area resident, who crosses paths with friends, enemies, family, and strangers on the last day of 2008.

An odd couple of sorts, meditative and stern Alvin and his girlfriend’s brother, Lance, dopey and insecure, leave the city behind to spend the summer in solitude repainting traffic lines down the center of a country highway ravaged by wildfire. As they sink into their job in the remarkable landscape, they learn more than they want to about each other and their own limitations. An unlikely friendship develops through humor and nasty exchanges, leading to surprising affection. Adapted from Icelandic film Either Way, Prince Avalanche is driven by wonderful performances by Paul Rudd, Emile Hirsch, and Lance LeGault. Writer/director David Gordon Green gets back to his independent roots with this character study, which shows his knack for realistically capturing people and finding meaning in their lives and dreams. With a soundtrack by Explosions in the Sky and David Wingo and gorgeous cinematography by Tim Orr, Prince Avalanche bucks convention by exploring male bonding in a refreshingly genuine way.

Related Content
Previous Article
Tobias Lindholm Talks A HIGHJACKING, Including Real-Life Former Hostages in the Film,…
Next Article
Anna Kendrick in Talks to Play Cinderella in Musical INTO THE WOODS;…
SHARE TWEET CHAT