Just last week the official lineup for the upcoming 2013 SXSW Film Festival was announced, and today the fest has unveiled its lineups for the midnight and shorts categories.  While films like Before Midnight, Much Ado About Nothing, Evil Dead, and The Incredible Burt Wonderstone will screen in the film festival’s other sections, the midnight lineup includes films like Rob Zombie’s The Lords of Salem, the anthology sequel V/H/S/2 (which recently changed its title from S-V/H/S), and the much buzzed-about horror pic You’re Next.  Hit the jump to take a look at the full lineup. 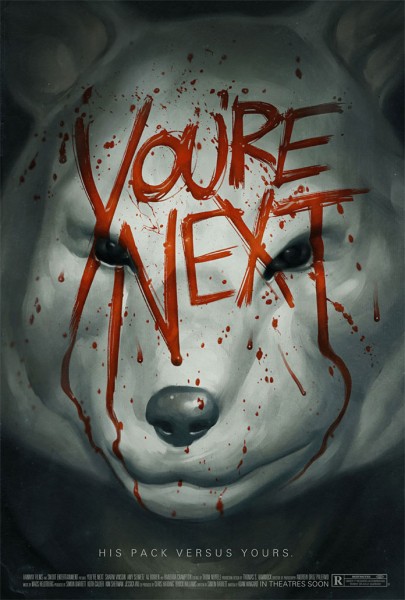 Big Ass Spider!
Director: Mike Mendez, Screenwriter: Gregory Gieras
When a giant alien spider escapes from a military lab and rampages across the city of Los Angeles, it is up to one clever exterminator and his security guard sidekick to kill the creature before the city is destroyed. Cast: Greg Grunberg, Lombardo Boyar, Clare Kramer, Ray Wise, Lin Shaye, Patrick Bauchau (World Premiere)

Haunter (Canada)
Director: Vincenzo Natali, Screenwriter: Brian King
Lisa Johnson is one day shy of her 16th birthday and will be forever. She and her family are doomed to repeat the fateful day before they were all killed in 1985.  Cast: Abigail Breslin, Stephen McHattie, Peter Outerbridge, Michelle Nolden, David Hewlett  (World Premiere)

Plus One
Director: Dennis Iliadis, Screenwriter: Bill Gullo
When the party of the decade is disrupted by a supernatural phenomenon, the night soon descends in to chaos.  Cast: Rhys Wakefield, Logan Miller, Ashley Hinshaw, Natalie Hall (World Premiere)

The Rambler
Director/Screenwriter: Calvin Lee Reeder
After being released from prison, a man known as The Rambler stumbles upon a strange mystery as he attempts a dangerous journey through treacherous back roads and small towns en route to reconnecting with his long lost brother.
Cast: Dermot Mulroney, Lindsay Pulsipher, Natasha Lyonne, James Cady, Scott Sharot

You’re Next
Director: Adam Wingard, Screenwriter: Simon Barrett
A fresh twist on home-invasion horror. A gang of masked murderers descend upon a family reunion, and the victims seem trapped…until an unlikely guest proves to be the most talented killer of all.
Cast: Sharni Vinson, Nicholas Tucci, Wendy Glenn, AJ Bowen, Joe Swanberg

NARRATIVE SHORTS
A selection of original, well-crafted films that take advantage of the short form and exemplify distinctive and genuine storytelling. The winner of our Grand Jury Award in this category is eligible for a 2014 Academy Award nomination for Best Narrative Short.

THE AUDITION
Director: Celia Rowlson-Hall
A young woman auditions for the role of “Clipboard Woman”

Black Metal
Director: Kat Candler
After a career spent mining his music from the shadows, the actions of one fan creates a chain reaction for the lead singer of a black metal band.

Boneshaker
Director: Frances Bodomo
An African family, lost in America, travels to a Louisiana church to find a cure for its problem child.

Chiralia (Germany)
Director: Santiago Gil
Around an isolated lake, the experience of a tragedy travels like a wave through space and time, from person to person, from memory to imagination.

Ellen Is Leaving (New Zealand)
Director: Michelle Savill
On the eve of departing overseas, Ellen makes the fateful decision to gift her boyfriend a new girlfriend.

It’s Not You, It’s Me
Director: Matt Spicer
A young woman’s relationship takes a dark turn when every sound her boyfriend makes starts to annoy her.

Kelly
Directors: Nathan Honnold, Alex Zhuravlov
Kelly, a female entrepreneur, gives personal advice and insight into business and beauty. She finds inspiration in her personal experiences and in her role model Mary Kay.

MOBILE HOMES (USA/France)
Director: Vladimir de Fontenay
MOBILE HOMES tells the story of a young woman, trapped in sex trafficking, and her son who explores an unlikely way out.

MOUSSE (Sweden)
Director: John Hellberg
What could be easier than robbing a small bookie place on the outskirts of town?

Natives
Director: Jeremy Hersh
Rachel, a young Manhattanite, is so in love with her girlfriend’s Native American roots that she begin to lose sight of their relationship.

Necronomica
Directors: Kyle Bogart, Cliff Bogart
A friendship is tested as two Black Metal bandmates lose hope that they will ever achieve their ultimate goal: To be the most evil band in the world.

#PostModem
Directors: Jillian Mayer, Lucas Leyva
#PostModem is a comedic satirical sci-fi pop-musical based on the theories of Ray Kurzweil and other futurists. It’s the story of two Miami girls and how they deal with the technological singularity, told in a series of cinematic tweets.

SEQUIN RAZE
Director: Sarah Gertrude Shapiro
Behind the scenes of a hit reality TV show, a jaded producer and a spurned beauty queen face off in mental mortal combat. One driven by cash rewards and ambition, the other clinging to her last shred of dignity. Only one can leave victorious.

Shale
Director: Jed Cowley
John, a stubborn shale pit owner, and his once dutiful wife, Sheila, have a grave confrontation after months of separation.

Si Nos Dejan
Director: Celia Rowlson-Hall
If they let us, we will love each other all our lives.

SKIN
Director: Jordana Spiro
A child taxidermist, an outsider in his small town, is entranced by a girl who finds his work beautiful. But just as their relationship begins to progress, he does something that drastically changes everything.

The Slaughter
Director: Jason B. Kohl
A pig farmer tests his unemployed son’s resolve to join the family business.

Social Butterfly (France/USA)
Director: Lauren Wolkstein
A 30-year-old American woman enters a teenage party in the South of France. Some of the guests wonder who she is and what she is doing there.

Top Floor
Director: Aaron David DeFazio
When Ron, a high powered hedge fund manager, finds out that his biggest investor may be pulling out of the fund, his world begins to collapse on him, as he juggles fatherhood, his ex-wife, and one very big secret.

DOCUMENTARY SHORTS
Unfiltered slices of life, from across the documentary spectrum.

After (UK)
Director: Lukasz Konopa
‘After’ is a film about contemporary life in Auschwitz. In an observation from dusk till dawn, it portrays the theatre of everyday life around the grim confines and captures the energies and activities of a world fascinated by this former concentration camp.

Contents of C______’s Box, in no particular order
Director: Ian Berry
An exploration of a failed relationship through a box of mementos.

Endless Day (Germany)
Director: Anna Frances Ewert
This film is about an insomniac’s inner journey through a sleepless night.

Flutter (USA/Canada)
Director: Dara Bratt
“Flutter” is a short observational documentary about an ordinary man obsessed with the extraordinary.

Introducing: Bobby.
Director: Roger Hayn
A character portrait of a debt-ridden man with a violent past in pursuit of a fresh start.

The Knife Maker
Director: Keith “keef” Ehrlich
Writer turned knife maker Joel Bukiewicz discusses the human element of craft–the potential for a skill to mature into an art. In sharing his story, he alights on the real meaning of handmade—a movement whose riches are measured in people, not cash.

The Other Dave
Director: Pasquale Greco
Life changes people; especially when it involves 1 billion volts of electricity. “Super Dave” Manning, was on his way to a pro golf career when lightning struck and permanently changed his perception of reality.

Recollections (Japan)
Director: Nathanael Carton
A community of tsunami survivors hold onto their existence through pictures recovered from the debris.

The Roper
Directors: Ewan McNicol, Anna Sandilands
A black man with hip-hop and zydeco roots hard-grafts through the local, all-white rodeo circuits in the Deep South as he dreams of competing in the National Finals Rodeo in Las Vegas.

SLOMO
Director: Josh Izenberg
Depressed and frustrated with his life, Dr. John Kitchin abandons his career as a neurologist and undergoes a radical transformation into SLOMO, trading his lab coat for a pair of rollerblades and his IRA for a taste of divinity.

The Village (Brazil)
Director: Liliana Sulzbach
The daily life of the dwellers of a microtown in the the south of Brazil which is about to vanish.

ANIMATED SHORTS
An assortment of stories told using a mix of traditional animation, computer-generated effects, stop-motion, and everything in-between. The winner of our Grand Jury Award in this category is eligible for a 2014 Academy Award nomination for Best Animated Short.

The Blue Umbrella
Director: Saschka Unseld
It is just another evening commute until the rain starts to fall, and the city comes alive to the sound of dripping rain pipes, whistling awnings and gurgling gutters. And in the midst, two umbrellas—one blue, one not—fall eternally in love.

The Event (USA/UK)
Director: Julia Pott
Love and a severed foot, at the end of the world.

The Gold Sparrow
Director: Daniel Stessen
In a black and white world artists must defend their color.

In Hanford
Director: Chris Mars
In Hanford is artist Chris Mars’s fantastic exploration of real incidents in Hanford, Washington, where the local environment was poisoned as a result of cold war era nuclear arms manufacture.

Kishi Bashi – ”I Am The Antichrist To You”
Director: Kishi Bashi
A surreal stop motion collaboration between avante-pop/violinist Kishi Bashi and acclaimed animator Anthony Scott (Coraline, Paranorman). An abandoned puppy awakes in a post-apocalyptic world with vivid memories of his love and all that he lost.

Old Man
Director: Leah Shore
For more than 20 years Charles Manson has refused to communicate directly with the outside world. Until Now.

The Places Where We Lived
Director: Bernardo Britto
A man wakes up with a weird feeling. His parents are selling his childhood home.

MIDNIGHT SHORTS
Bite-sized bits for all of your sex, genre, and hilarity needs.

The Apocalypse
Director: Andrew Zuchero
Four uninspired friends try to come up with a terrific idea of how to spend their Saturday afternoon. The Apocalypse.

BOY FRIENDS
Director: Hugo Vargas-Zesati
A man disturbed by a dream awakens to realize his unconscious has called his self-awareness into question. When confronting himself, misfortune brings the temporal world into perspective.

Cats
Director: Michael Reich
A master groomer explains the sensual methods of dog grooming to his young and beautiful apprentice. Her mind begins to wander into a profane dream that melds the grossness of dog bathing with voyeuristic and domineering sexuality.

Dance Till You Drop
Directors: Eric M. Levy, Juan Cardarelli
She thought the house was safe, but under the right circumstances, anything can be dangerous. Even a dance montage.

Hell No
Director: Joe Nicolosi
Hell No is a new type of terror, a reality-based horror film that pits real smart people in terrifying horror situations…

Play House
Director: Brandon LaGanke
Harold’s crumbling family is bound only by his unconditional love for them.

Root
Director: Caleb Johnson
A young woman has an affair that leaves a hideous mark. Her attempts to remove it only make it worse.