The summer movie season is about to begin, and Entertainment Weekly is kicking things off with their annual Summer Movie Preview.  Naturally, Christian Bale and Anne Hathaway grace the cover for Christopher Nolan’s closing chapter in his Batman trilogy, The Dark Knight Rises.  The image gives us yet another look at Batman and Catwoman, but EW has also provided some choice quotes from the upcoming issue.  Included is Nolan talking about his approach to Catwoman and Tom Hardy addressing the fan outcry over the difficulty of understanding Bane’s dialogue.

Hit the jump to check out the cover and to see what Nolan and Hardy had to say.  The Dark Knight Rises opens on July 20th. 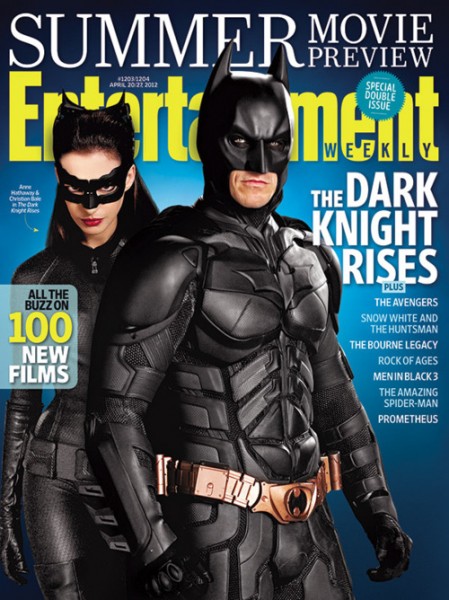 First and foremost, let’s get to the whole “not understanding Bane” issue.  Speaking with EW, Hardy doesn’t seem to think we’ll have a problem understanding the dialogue once we settle into the movie:

“The audience mustn’t be too concerned about the mumbly voice.  As the film progresses, I think you’ll be able to tune to its setting.”

Let’s remember that the IMAX prologue was released just after Nolan had wrapped shooting, so hopefully the final audio mix is a bit more intelligible.  Hardy admitted that they didn’t go the muffled route without pause:

“It’s a risk, because we could be laughed at — or it could be very fresh and exciting.”

The actor revealed that Bane’s dialect was influenced by “a desire to honor the character’s brains and Caribbean heritage.”  As for Catwoman, EW notes that Nolan’s take is far from the “campy sexpot” of some other incarnations, but more along the lines of “a shifty cipher, calloused survivor, and world-class criminal.”  Nolan himself described his Catwoman thusly:

“She has a very strong way of protecting herself and those she cares about, which implies an underlying darkness.”

You can read much more from Nolan, Hardy, and Hathaway herself over at EW.  I’m sure we’ll be bringing you more images and choice nuggets of info as the magazine’s issue hits shelves.