This trailer for Arnold Schwarzenegger’s recently-announced animated TV series The Governator doesn’t look like a real thing.  It feels like a TV Funhouse bit and at any second someone is going to crack a joke about how this is trying to ape every major action franchise from the last two decades and failing miserably at it.

The premise is that Schwarzenegger, now retired from failing as California’s governor, is taking up a life of high-tech crime fighting and defending the state from Transformers.  None of it makes any sense, especially the part where Schwarzenegger keeps a bunch of kids locked up in his private vault.  Oh, and then there’s the Black Eyed Peas music.  This looks like a train wreck of epic proportions and I can’t wait to not look away.  Hit the jump to check out the trailer and to learn how Schwarzenegger wants to turn The Governator into a 3D feature film.

In addition to a TV series that’s scheduled to premiere in late 2012, Deadline reports that The Governator is also set to launch a comic book series and Internet programming before the TV series premieres.  There’s also a 3D feature film set to be released in early 2013.

It’s like no one had the balls to go up to Schwarzenegger and say “You haven’t been missed and this is a terrible idea.”  If this were made tongue-in-cheek, then I could respect it and I could applaud Schwarzenegger for parodying the idea of him carrying on as an action hero.  Instead, it seems like he’s crafting the ultimate vanity project and thinks that he’s enough of a star to launch an original franchise. 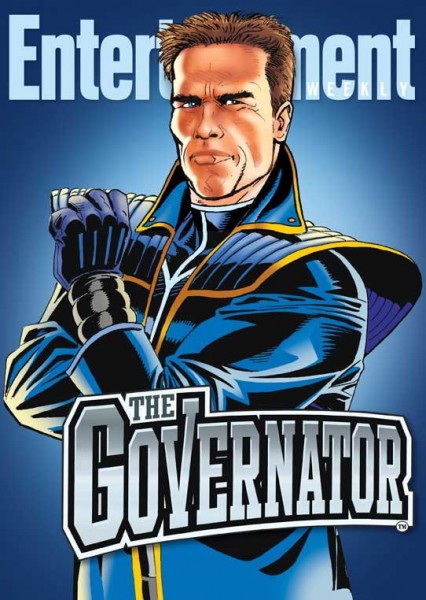