Iron Man 3 opens this weekend so it’s old news.  It’s six months until Thor: The Dark World so now we need to know almost everything about it.  The sequel has Thor (Chris Hemsworth) reuniting with Jane Foster (Natalie Portman), and faced with the new threat of sorcerer Malekith the Accursed (Christopher Eccleston) and his horde of dark elves.  New director Alan Taylor (Game of Thrones) takes the action off of Earth and into the mystical realms that will lend themselves to some impressive sets and set pieces.

First up, here’s the new image from Thor: The Dark World via EW: 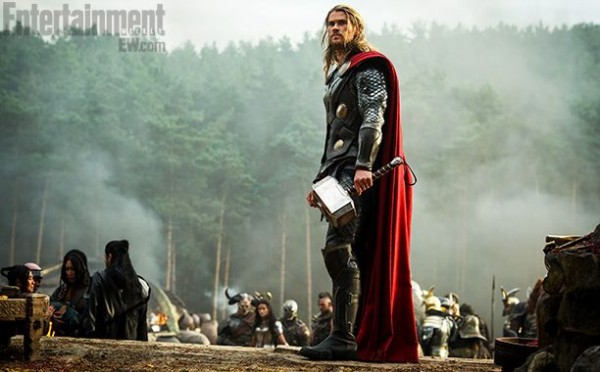 Feige tells EW that Thor, like Tony Stark, has also been affected by the events of The Avengers, specifically in terms of his relationship with Loki.  The Marvel head also talked about how Taylor is designing the look and feel of the sequel:

“Alan is bringing a grittier, more visceral, more textured patina to the designs of the worlds, and to Asgard in particular,” Feige says. “It’s less to chase either Game of Thrones or Lord of the Rings — because you’re not going to catch up. But part of the fun of Thor over the other characters is he doesn’t have to stay on Earth. We visit a few of the other realms in this new movie.”

Jumping all the way to Phase Three, Feige talked about the current status of Ant-Man.  Feige says the test-footage that played at Comic-Con and leaked online has helped to give audiences a better idea of what to expect from the movie in terms of the character’s powers.  Furthermore, shooting is set to begin next year, but they might have their Ant-Man by the end of 2013:

“We’ve talked about various names over the past eight years but as you can imagine they keep changing as time goes by,” says Feige. “But towards the end of this year, we’ll buckle down and start casting and start refining the script, which is great and which is very Edgar. He has done a great job being incredibly true to the comics but is putting his own spin on it, so we’ll be drawing on multiple mythologies for this one.”

I’m glad to hear that Marvel won’t be trying to polish off the edges of Wright’s style, but it’s not too surprising after seeing Iron Man 3 and how the studio let writer-director Shane Black stay true to his voice.

For more from today’s onslaught of superhero news, click the links below: