The first trailer for writer-director Lynn Shelton’s Touchy Feely is now available.   The family drama centers on a massage therapist who develops an aversion to physical contact, which complicates not only her profession but her romantic relationship.  It’s not my thing, but as far as quirky self-discovery indies go, you could probably do worse.  Touchy Feely stars Rosemarie DeWitt, Ellen Page, Allison Janney, Josh Pais, Scoot McNairy, Ron Livingston and Tomo Nakayama.  Hit the jump to watch the trailer.

Check out the first trailer for Touchy Feely here (via Apple):

Here’s the synopsis for Touchy Feely:

TOUCHY FEELY is a closely observed examination of a family whose delicate psychic balance suddenly unravels. Abby (Rosemarie DeWitt), is a sought after massage therapist and a free spirit, while her brother Paul (Josh Pais) thrives on routine and convention, running a flagging dental practice and co-dependently enlisting the assistance of his emotionally stunted daughter Jenny (Ellen Page). Suddenly, transformation touches everyone. Abby develops an uncontrollable aversion to bodily contact, which not only makes her occupation impossible but severely hinders the passionate love life between her and her boyfriend (Scoot McNairy).

Meanwhile, rumors of Paul’s “healing touch” begin to miraculously invigorate his practice as well as his life outside the office. As Abby navigates her way through a soul-searching identity crisis, her formerly skeptical brother discovers a whole new side of himself. TOUCHY FEELY is about the experience of living in one’s own skin, both literally and figuratively. The film, written and directed by Shelton, and co-starring Allison Janney, Ron Livingston, and newcomer Tomo Nakayama (of the indie rock band Grand Hallway), is filmed on location in Shelton’s hometown and urban muse of Seattle. 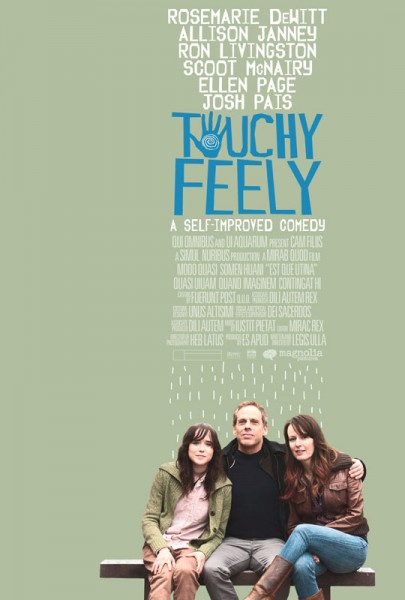