The previously untitled WikiLeaks film directed by Bill Condon (Dreamgirls) will now be titled The Fifth Estate.  The first image from the film has also debuted.  It features Benedict Cumberbatch (Sherlock) as Julian Assange with Daniel Brühl (Inglourious Basterds) as Daniel Domscheit-Berg.  The Fifth Estate centers on the polarizing figure of Assange from the rise of his WikiLeaks website to the eventual controversial explosion over leaked government documents.  The film is now slated to release on November 15, 2013.  Hit the jump for the full press release and to see the first image from The Fifth Estate.

Deadline reported on the partnership between Participant Media and DreamWorks for The Fifth Estate, as well as the new title, release date and image, seen here.

Here’s the full press release for The Fifth Estate:

“The Fifth Estate” will open in U.S. theaters on November 15, 2013 and be distributed domestically by Disney’s Touchstone label. Distribution internationally will be split among Disney, DreamWorks partner Reliance, and deals made through the studio’s partnership with Mister Smith Entertainment.

Following Daniel Domscheit-Berg (Brühl), an early supporter and eventual colleague of Julian Assange (Cumberbatch), “The Fifth Estate” traces the heady, early days of WikiLeaks, culminating in the release of a series of controversial and history changing information leaks. The website’s overnight success brought instant fame to its principal architects and transformed the flow of information to news media and the world at large.

Joining DreamWorks as a co-financier on “The Fifth Estate” is Participant Media. This will be the fifth collaboration between the two companies who previously partnered on Steven Spielberg’s “Lincoln,” the 2011 Academy Award-winning smash “The Help,” “The Kite Runner” and “The Soloist.” With a focus on real issues that shape our lives, Participant creates social action and advocacy programs to transform the impact of the media experience into individual and community action. Some of their other films include “An Inconvenient Truth,” “Good Night, and Good Luck,” “Food, Inc.,” “Charlie Wilson’s War,” “Waiting for ‘’Superman,’” “The Best Exotic Marigold Hotel” and the current Academy Award nominee for Best Foreign Language Film, “No.”

Bill Condon (“Kinsey,” “Dreamgirls,” “The Twilight Saga: Breaking Dawn”) will direct “The Fifth Estate” from a screenplay by Josh Singer (TV’s “Fringe,” “The West Wing”), based on “Inside WikiLeaks: My Time with Julian Assange at the World’s Most Dangerous Website” by Daniel Domscheit-Berg and “WikiLeaks: Inside Julian Assange’s War on Secrecy” by David Leigh and Luke Harding. The producers are Steve Golin and Michael Sugar, with Participant’s Jeff Skoll and Jonathan King joining Richard Sharkey as executive producers. “The Fifth Estate” is a coproduction between Afterworks and FBO, with Hilde De Laere co-producing for FBO. The film is supported by the Belgian Tax Shelter for Audiovisual Production.

Said director Bill Condon, “It may be decades before we understand the full impact of WikiLeaks and how it’s revolutionized the spread of information. So this film won’t claim any long view authority on its subject, or attempt any final judgment. We want to explore the complexities and challenges of transparency in the information age and, we hope, enliven and enrich the conversations WikiLeaks has already provoked.” 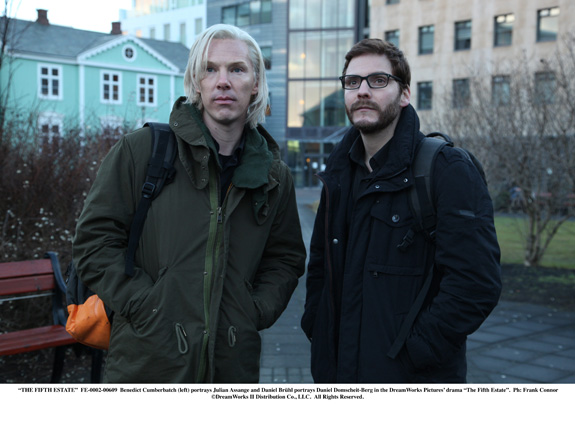